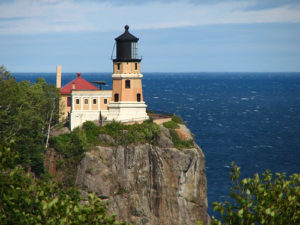 Today is National Lighthouse Day! So why not tell you a little bit about a Minnesotan lighthouse located in Two Harbors, MN?!

This lighthouse is actually located in Split Rock Lighthouse State Park, so while this park features the lighthouse, it also offers a ton of other stuff to do! There are stretches of hiking and biking trails along the Lake Superior shoreline, cart-in camping sites, picnic areas and of course the lighthouse itself!

The Split Rock Lighthouse was built after a series of shipwrecks occurred after a single large storm in 1905. The storm ended up damaging 29 ships, after this storm Split Rock was named, “the most dangerous piece of water in the world.” Constructed was completed in 1910 and the lighthouse was in use until 1939. It was one of the most visited lighthouses in the United States.

The lighthouse was restored to appear as it did in the 1920’s and is still visited by thousands of patrons every year!